Calgary police say they have arrested a suspect in connection with an alleged violent sexual assault in a condo building in the city, though one suspect remains outstanding.

Police said a 19-year-old woman was entering a condo elevator in the downtown area early Wednesday when two men followed behind her.

Police allege the men attempted to rob the woman in the elevator, though she resisted.

At that point, one of the men allegedly pulled out a handgun, dragged the woman out of the elevator and sexually assaulted her in a stairwell, police said.

Investigators said the men then went to the underground parking garage, got in a vehicle and fled the area.

On Thursday, police released images of two suspects in an elevator in the hope that someone would be able to identify them.

Global News visited the scene of the alleged incident Friday, where a resident said while the building has some security measures, there is no concierge at night.

Airbnbs in the building have also posed some problems, according to the condo board; the alleged victim in this case was also reportedly staying at an Airbnb there that was not allowed to be operating.

Police have since announced that Jonathan Henry, 26, of Edmonton, AKA “J-Rock”  has been arrested in connection with the alleged violent sexual assault.

Police said officers are still searching for a second suspect, in connection with the incident. 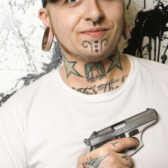